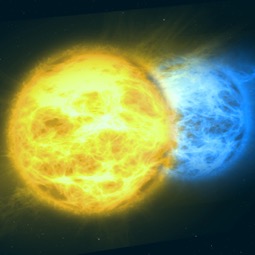 The second Divine Basic-force, the Cosmic All-fatherhood, the creative and densifying Force, bundled in a shining astral sphere of energy- plasma.In that spiritual plasma the first astral star was born: Father Sun.  Father Sun represent the All-father for all the life that was to be created in the universe. New life was born through the amalgamation of Fatherly energy with Motherly energy.At the heart of the astral Motherhood the biological life of humans, animals and plants awoke.In the Universe, new planets and stars were created.

-Sun and Moon were able to condense themselves for the first time with the origin of the creation and motherhood continued to accept that warmed plasma, but by means of this the life condensed itself in an embryonic state.

-The Sun as the paternal authority emitted that power and the Mother as the First Cosmic Grade of Life absorbed that sacred working into herself.

-Fatherhood and motherhood are one, that space continues, more and more life comes.

-By means of that Sun and Moon are one life, they are twin souls.