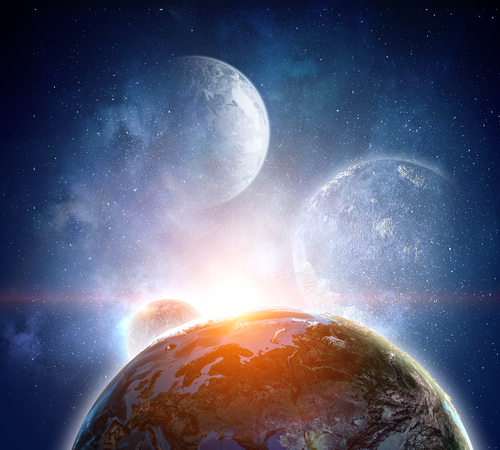 24.4 The birth of Mars, Earth, stars and planets. The Expanding Universe

What our earthly science calls “Big bang” and “Expanding universe” is nothing more than a simple description of a material process of creation. Heavenly masters, who are many lives further in their evolution, describe in the books of Jozef Rulof how the Divine All-Soul reveals itself at the level of Soul, Spirit and Matter, as the start of a Divine evolution process.
The human Soul is an evolving life-form of the All-Soul. Human Soul and all Life must go through seven evolutionary phases before the Divine All is achieved. The first three are in our universe with the mother planets Moon, Mars and Earth.

-In this aura, in this eternity of the universe stars and planets condense themselves.

-All objects have their own atmosphere; that power emanated from them, and it is also the protection for this awe-inspiring wonder, which also encompasses the way planets, stars and other objects have assumed their own orbit.

-Because of this, my brothers, we see that the universe will create and give birth to new life, and that means, that more universes will originate, and so this universe still cannot be the Divine All. This life is still not that far! But soon we will see those worlds. They will then be the Fourth, Fifth, Sixth and the Seventh Cosmic Grades of Life, the Seventh of which represents the Divine All.