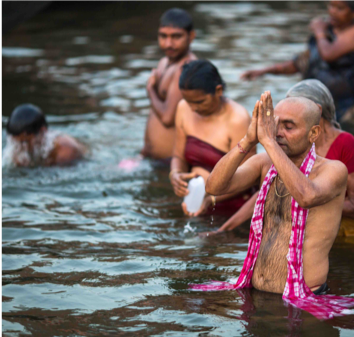 14.5 In ancient and Eastern religions, Mother Water is often Holy

Mother Water represents God as Mother.
In the ancient Egyptian religion the priests heard the water of the Nile speak and here they sought the mystical unity with God. In our time we see that in India, where the Holy Ganges is worshiped as Mother.

-You innocent people, helpless children of Amon-Ré, do not be ashamed, you will bear that, as a result of which Mother Earth has created you. She bore you and she knows your life.
She wants you to come to her, as during the first hours of your birth, you are one in that.

-Go into the Mother and surrender to her.
The priests went into the water naked and then meditated sometimes naked, if it concerned the development of the mediumship. They went naked to Mother Nature and reached mystical unity because of their pure meditation. For these séances, they experienced the same laws, the contact with the Other Side.

-Ramakrishna considered the waters sacred, he knows, and he got to hear from that life that he can only now understand. Yes, my brothers from the East, you went deep, you knew that we were born from the waters, that the waters possess motherhood for all the life of God. What does the sober West know about this universe? Nothing.