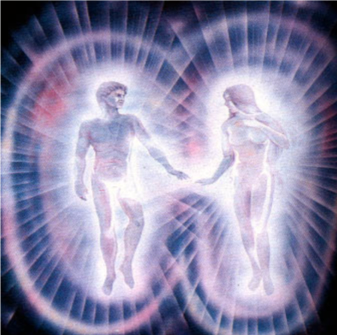 16.6 The Earth and then, together with the twin soul on the way to the Divine All

After Mars the soul goes over to the Third Cosmic Grade of life: six transition planets, scattered far in the universe and than the Mother Planet Earth. The Earth then consisted of a spiritual substance. The first souls had to rebuild their human bodies completely from cell life in the waters to humans on land. Later souls incarnate directly into a human embryo. After Earth, the soul, along with the twin soul, continue into the Celestial realms and then to the first planet of the Fourth cosmic grade of life. That planet is in a different Universe, which consists of a rarer substance.
Then every soul will have to acquire the 5th, 6th, and 7th Cosmic degrees, before being absorbed in the Divine All.

-The time will come when mankind and animals will leave the planet earth, but all those who have reached the highest de- gree of life we shall see again in our life, the life of the spirit. All these beings will leave the earth and will pass on to the fourth cosmic degree.

The Origin of the Universe p.85

-This wonderful universe, which the human being sees from the Earth, is only fatherhood and motherhood and nothing, nothing else! And the human being must master that fatherhood and motherhood, for which the child of God gets to experience millions of lives. And reincarnation lives beyond that, also for Sun and Moon, for this universe, so that we can and must accept that the Fourth Cosmic Grade of Life was really also able to materialise and spiritualise itself.