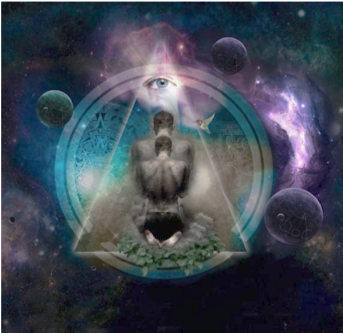 9.4 The Fourth Cosmic Grade is a new universe for the further evolution of the Soul

The cosmic laws of Fatherhood and Motherhood and Reincarnation send the human Soul ever further through the Universe on the way to the Divine All. There are a total of seven Cosmic Degrees of spiritual Love.
The Earth and the Celestial spheres form the third Cosmic Degree. Then the Soul goes on to the fourth Cosmic Degree, a new Universe for the further evolution.

-There are seven degrees of spiritual love in the universe, which is the universal attunement. Now the life that exists in the seventh degree passes on from there into the Divine-All.

-And already by means of this, my sisters and brothers, we know that this space, this universe, had to create another universe, because this is still not the Divine All, and we will soon enter the fourth cosmic grade of life.

-Now the life that exists in the fourth attunement, they are holy beings with a spiritual attunement. They may call themselves holy because they possess these powers and are therefore spiritual beings.