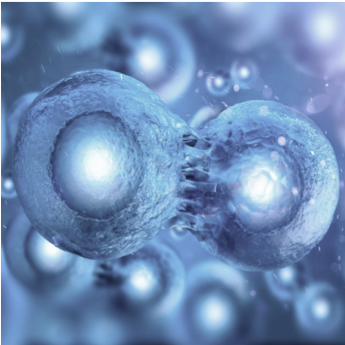 16.2 The birth of the first human cells

At the beginning of creation, the All-Motherhood formed a sphere of spiritual nebula plasma, in which the first planet, Mother Moon, came into being. In here billions of god-human cells separated. Small translucent droplets made up of plasma and soul. These cells formed pairs and connected. Each cell gave a part of itself to the other, from which a new cel grew. The new formed cel then split into two children cells.
These had got enough power to grow to maturity, but not enough to reproduce. For this they needed the power of the parent cells, which had died in the meantime and waited in the world of the unconscious. Their souls connected with the children’s process of reproduction and inspired the new fruit, which also split in two cells. A process that we still see in the human womb here in our time on Earth. Then this process of reproduction was repeated, in which parents and children reincarnated together.

-We see the Moon now as an astral, so spiritual sphere, as a spiritual universe, originated by means of the splitting of God, but we now get to know it as an independent life. And this life will also split and condense itself, as God did and was able to do this.

-Those first cells came back and they experienced this bearing and creating process and those two cells produced new life and that father and that mother now enter that second embryo.
Therefore the children produce and the father and mother inspire the new life, the new birth.

–God gave himself to all the life! Of course also His character traits and characteristics, His Personality. And hereby all the Divine gifts.

See also: Film and article: Our first lives as a cell