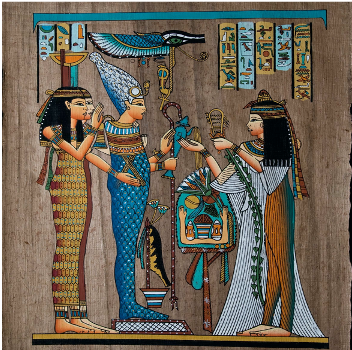 22.4 As a priest in the Temple of Isis, Jozef Rulof learned to disembody

In the books Jozef Rulof recieved a different name from his master; André or André-Dectar, names from his previous lives. In these lives, he was already prepared for his task in this life and learned how to embody. An important life was that of a priest in the Temple of Isis in ancient Egypt, about four thousand years ago. This life of Jozef Rulof as the priest Dectar, is described in detail in the exciting book “Between Life and Death”.
During decades of practice, the priests learned to step out consciously. If a priest fully mastered this gift, he was called a “Great Winged One”.
He was then allowed to embody, while the other priests sat in a circle around him. The embodied Great-Winged One then received knowledge from an astral spiritual master about the Divine Laws and Wisdom. From his disembodied position, the priest passed this knowledge on to the sitting priests. This knowledge was later shared with the Pharaoh.

Source: Between Life and Death

-Then Master Alcar brought him back to Ancient Egypt and he got to know himself there as a priest. That was in the Temple of Isis.

-We wrote the book ‘Between Life and Death’ then… a wonderful spiritual gift from the Masters for your life, if you are open to that!

-The priests of ancient Egypt experienced this gift and elevated it to a great height.
Yet, this divine gift has remained in the hands of the Other Side. If the priest had disembodied, then he lived on this side and the astral wisdom could be received. The master on this side took the priest to the laws, explained the divine wisdom to him and he also passed this onto the people at the séance.

-We must build up an instrument, we must build up the human being who is ready to experience that unity, so that the All-Source as mother is brought to earth.