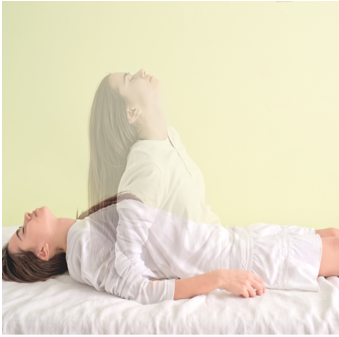 Jozef Rulof’s coach, master Alcar, made him consciously experience all phases of the disembodyment, so that he understood the process well. This knowledge was necessary to properly understand the process of dying, which in the first phase is equal to the disembodyment.
He learned to relaxe and gradually withdraw his feeling from his physical body and transfer it to his spiritual body, until the moment he could observe and move in the astral world.
Only in this disembodied form, as a spirit he was able to visit and experience all worlds after death with his masters.
With disembodyment and thus also with an NDE, the spiritual body remains connected to the physical body through the fluidcord.
If the fluidcord breaks, the spirit can no longer return to the physical body and the body dies.

-When this insensibility had progressed beyond the knees, he wouldn’t have noticed anyone prodding or pinching him. This was then followed by a drowsy feeling, which told him that his spirit was about to leave the body.
It would slowly draw upwards, and when it had left half of the body his thoughts would start to get dimmer, until his spirit had freed itself entirely.

-We’re far from your home here, Andre. Yet you could be back in your body and awake again within seconds. We can move about, take any action or do  our work with the speed of our thoughts.

-I have disembodied fifty thousand times. We now already do that in a few minutes. That even happened this even- ing, that can happen while talking. But I therefore know the hells, the heavens, the cosmos, the planets, the stars. We have been in the Divine All. I have cosmic books.