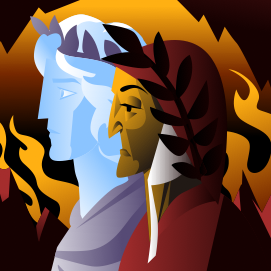 31.10 Dante Alighieri (1265-1321) together with his guardian angel Vergilius visited the astral worlds after the death

Dante Alighieri (1265-1321) was an Italian moral philosopher, poet and writer.
He was able to step out of his body and guided by the spirit Virgil, a deceased Roman poet, he visited the worlds after death. He described the experiences of these journeys in his books. His main work is known as The Divine Comedy (La Divina Commedia). It is a poem in three parts about a journey through the afterlife, from Hell (Inferno), through Purgatory (Purgatorio) to Paradise (Paradiso) and is considered a highlight of world literature.

-Did Buddha know this? Darwin? Dante? Yes, Dante departed from his body, he saw something of the astral world, but none of the spiritual laws, or he would have given you something completely different; by their wisdom, you will know the consciousness of the prophets.

-In those hells all the magicians of the earth live together, you meet all the grades and kinds there. They are devils. I was able to follow them there and my master explained all those kinds of people to me.”

-“You experienced it like Dante?” Something like that, but a bit more; Dante saw a few scenes, but not more. The man reflects and it makes him dizzy. He replies: “You are an extraordinary being.”
“Not directly that, my dear man, it is all so simple, but the West still has to awaken to it. I am a very ordinary instrument that has to receive everything, I have nothing from myself.
But I know the hells and the heavens better than life on earth. I have not yet seen anything of this beautiful world.”