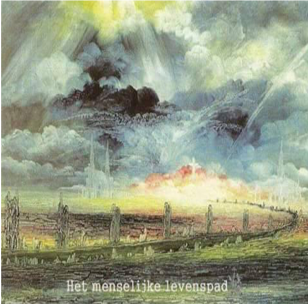 24.7 Through Reincarnation human can have spiritual and a physical evolution

In order to be able to evolve spiritual and physical, the human soul always needs a new body, a new life, in ever-changing situations.
When this physical evolution is completed on Earth, the Soul begins to dissolve the direct karma. Only then does Mother Earth let the Soul go and is it attracted by the astral sphere that connects to the level of consciousness that it has achieved in all earthly lives.

-Man not only needed millions of years for his material development, but also for his inner life. Both follow one course up to the very highest, which are the Divine Spheres.

The Origin of the Universe p.178

-God – it is Mother Earth – first gives us the seven grades for the human organism to experience and this also happens infallibly. It is only then that we begin with making good.’

The painting: The human path of live by Jozef Rulof.
Painted by the ghost of the late painter Vincent van Gogh with
the help of the body of Jozef Rulof in trance.